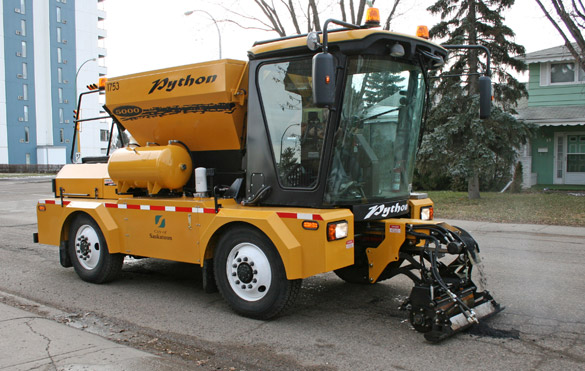 According to the Transportation Research Board’s report, Rough Roads Ahead:  “America’s $1.75 trillion public highway system is in jeopardy. Years of wear and tear, unrelenting traffic, an explosion of heavy trucks, deferred maintenance, harsh weather conditions, and soaring construction costs have taken their toll on America’s roads.”

The lifespan of those roads could be significantly extended if you repair the potholes – especially if you fill them before they get too big. And the Python 5000 pothole patcher is the right machine for the job.

It can be used year-round, and can fill three times as many potholes as a crew using traditional methods. The Python 5000 uses standard asphalt mixes and then compacts the patches, with the result being permanent patches that can outlast the road around them. Even more important, the operator of a Python 5000 stays safely inside the machine during the entire operation.

Because the Python 5000 repairs potholes so quickly and efficiently, a town or city would be much better able to keep up with the repair of potholes while they are small, thus greatly extending its lifespan before resurfacing is needed. 1The cost of resurfacing a mile of streets/roadways in 2003 was estimated at:

Using those 2003 cost estimates, if you were to delay resurfacing five miles of a two lane non-core urban street for five years, your interest-only savings at 5% interest would reach nearly $1 million.

Another major saving is the cost of potential lawsuits from people who have damages resulting from unrepaired potholes.

In addition, the “Rough Roads Ahead” report says unrepaired potholes add $335 annually to typical vehicle operating costs. In urban areas with high concentrations of rough roads, extra vehicle operating costs can be as high as $746 annually. There are 240 million registered vehicles in the United States. If you multiply that figure by an average cost of $540, you arrive at a staggering figure of $130 billion in increased repair costs.

No matter how you calculate it, a town or city can see substantial savings – in saved lives, reduced resurfacing costs and reduced cost of vehicle repairs for its citizens – by simply investing in a Python 5000 pothole patcher.

For more information you can visit their web site at http://www.pythonmfg.com