There is no argument that all asphalt cement (AC) pavements crack. Cracks in asphalt pavements are inevitable.  Neglect and lack of proper maintenance lead to accelerated cracking and/or potholing, further reducing the serviceability of the pavement. There are numerous reasons, which can be broadly categorized, in four distinct classes.

• Pavement Construction: Examples in this category include flaws in the selection of the right type of asphalt mix, poor mix design, engineering defects, unsuitable ambient conditions, etc. If all of these factors meet design criteria, poor workmanship may be considered as a cause for premature failure of the pavement.

• Traffic Frequency & Load: Fatigue cracking and rutting are the two principal considerations in the pavement design process because they are the primary mode of deterioration of asphalt pavements.

• Deterioration of the asphalt cement binder, primarily due to weathering under the degrading effects of ultraviolet radiation.

• Climatic conditions, and pavement expansion and contractions due to temperature variations, and freeze thaw cycles.

Once cracks develop, water easily penetrates into the base and sub-base of the pavement and damages the structural integrity of the aggregate materials.  Pavement joint and crack sealants are designed to protect the pavement by minimizing water infiltration and by preventing the accumulation of debris.  It has been amply demonstrated and documented that sealing cracks in flexible pavements is a sound preventive maintenance procedure, which adds many years to the life of the pavement, especially when used in conjunction with other preventive techniques such as slurry seal, chip seals and sealcoating.

The U. S. Army Corp of Engineers, CRRL, undertook a national survey of the crack sealing practices of the Department Of Transportation of all 50 states. It was concluded that 45 states utilized crack sealing under their standard pavement maintenance program. Even the sates that did not do crack sealing, recognized that cracks in their pavements were a problem.  States with numerous freeze-thaw cycles cited that;

• Crack sealing is an important procedure that must be addressed yearly.

• Crack sealing is one of the most cost-effective ways to prolong the pavement life, as much as 3- 8 years. 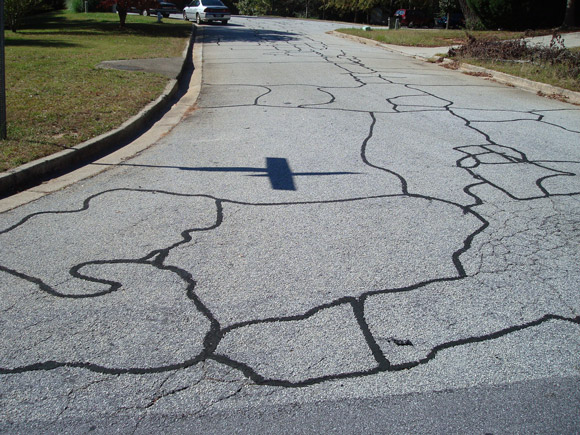 How Does the Pavement Deteriorate?

It has been estimated that ninety percent (90%) of asphalt roads in the United Sates have significant problems due to the deterioration of the base and sub-base material because of water infiltration.

Pavements where cracks have not been sealed, offer many routes for water entry into the base and sub-base courses.  Water will penetrate through cracks that are over 1/8th to ¼ inch wide. Finer cracks also allow water infiltration into the pavement through the pumping action of the traffic; the surface water is pushed into the cracks when vehicles pass over the cracks.  For cracks larger than ¼ inch, water flows in under gravity into the surface and the base course. Once water enters the base, the aggregate (limestone) absorb the water expand in volume and become soft, thus causing internal stress which accelerates the development of more and larger cracks.

There is no assurance that the pavement is not damaged if it looks fine on the surface. Not all deterioration will be visible. A study by Ontario’s Ministry of Transpiration, reported that on heavy traffic roads, half or more of the original asphalt pavement may disintegrate from the bottom up. In regions with extensive freeze-thaw cycles, with continuous thermal expansion and contraction of the pavement, the base and sub-base deteriorate much faster than in regions with moderate climates.

De-icing salts used in winter months further aggravate the problem. De-icing salt mixes with snow and forms a brine solution, which gets into the pavement and slightly melts ice in the base course. This produces even more thermal movement within the crack. The pavement weakened by a saturated base may experience localized failures when subjected to traffic. All cracked pavements will disintegrate and spall to various degrees depending upon the traffic volume or weight of the traffic load. Oil and other chemicals is also a major cause of cracked asphalt. 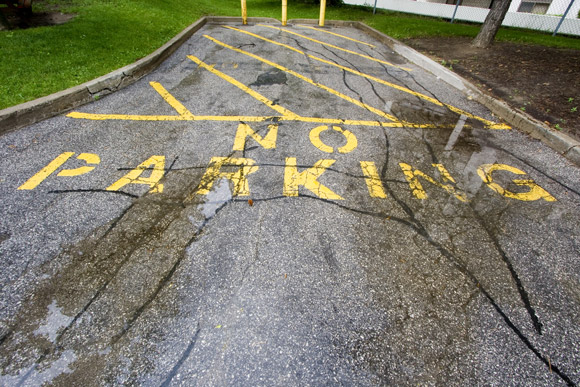 The Economics of Crack Sealing

Life Cycle Cost Analysis (LCCA) is defined in the Transportation Equity Ace for 21st. Century (TEA-21) as “a process for evaluating total economic worth of a usable project segment by analyzing initial costs and discounted future costs, such as maintenance, user costs, reconstruction, rehabilitation, and restoring and resurfacing costs, over the life of the project segment.

Crack sealing, like any other maintenance project, has to be done with proper economic justification, using proper materials and procedures. It is an established pavement preservation technology, which is steadily evolving to meet the challenges of modern age traffic requirements, utilizing state-of- the-art materials and tools.

Crack sealing is highly cost effective and a lot less expensive than other preventive procedures e.g. an overlay which costs 8 to 26 times as much as crack sealing. Furthermore, it was also reported crack sealing slowed the reappearance of reflective cracks in the new surface. Reflective cracks may be considered as secondary cracks which are caused by the problems within the base course and can not be eliminated without addressing the initial cause of the problem.

State maintenance departments bear most of the burden of dealing with cracks and out of several options available to them (slurry, chip sealing, overlays, etc.), they commonly exercise two, crack filling and crack sealing.  These operations have been routinely conducted for many years; however; their potential benefits as preventive maintenance tools have only been recognized over the last two decades. 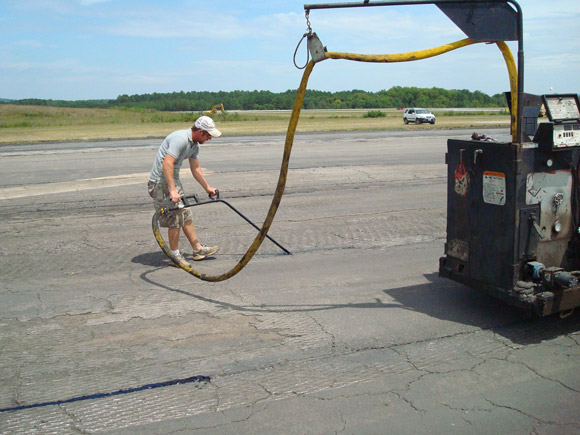 The terms crack filling and crack sealing are often confused as being one and the same. Not true, they are different. Although little distinction has been made in the past between crack filling and sealing, the purpose of each should be clearly understood so that the most cost-effective and long lasting crack treatment is used.

Crack sealing – the placement of specialized materials either above or into working cracks using unique configurations to prevent the intrusion of water and other incompressibles into the pavement cracks. Working refers to horizontal and/or vertical crack movements greater than 0.1 in (2.5 mm). Transverse cracks are a good example of working cracks; however, some longitudinal cracks may also meet the movement criterion.

Crack sealants are rubberized products that have the ability to seal the crack and flex with the pavement’s movement. They are used for active cracks that continue to extend both in size and severity with time and the ravages of the traffic and weather. Crack sealants have excellent adhesive and cohesive properties. In other words they firmly adhere to the walls of the cracks and do not tear or split when the cracks widen. Again their primary function is to stop the intrusion of water, salts and debris from entering the pavement sub-base and base courses.

Crack filling – The placement of materials into non-working cracks to substantially reduce the infiltration of water and to reinforce the adjacent pavement.  Non-working refers to horizontal and/or vertical movements less than 0.1 in (2.5 mm). Non-working cracks typically include mostly longitudinal, diagonal cracks and some block cracks. Such cracks do not move much due to the close spacing between the edges.

Since there is minimal flexibility expected, the materials used for crack filling are non-rubberized products, e.g. crumb rubber, AC-3, and asphalt emulsion. Crack filling is therefore simply filling the cracks that do not show significant movement.

It is easy to conclude that the requirements for crack sealing are more stringent both from material and equipment considerations than crack filling. 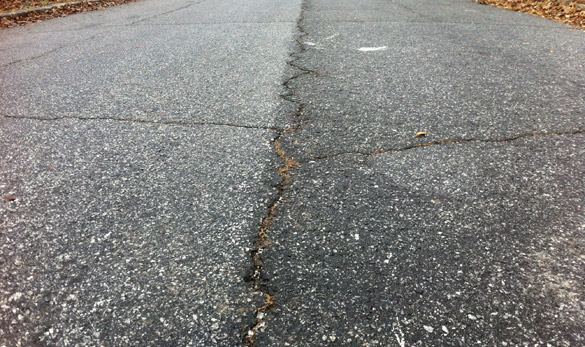 Crack Seal or Crack Fill – How to Decide?

Generally, Transverse cracks are the first ones to appear in a pavement. Several different types of cracks may appear during the same period. Under such conditions, one material meeting the most demanding type crack may be appropriate.

For deciding whether to fill or seal cracks, the expected movement of the cracks in the pavement should be carefully considered. Generally, non-working cracks with moderate to no edge deterioration should be filled and the ones with limited edge deterioration are sealed. Experienced personnel can usually identify the crack type; working or non-working and take the appropriate action. The following tabulation is a summary of the foregoing descriptions. 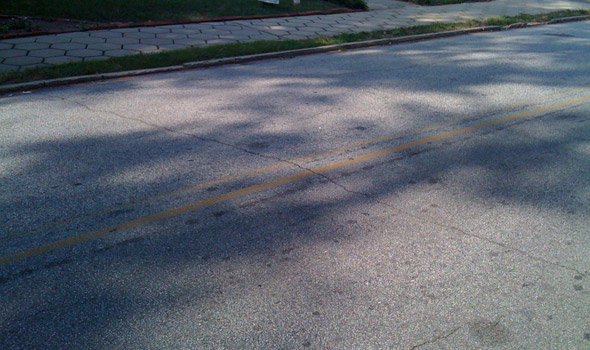 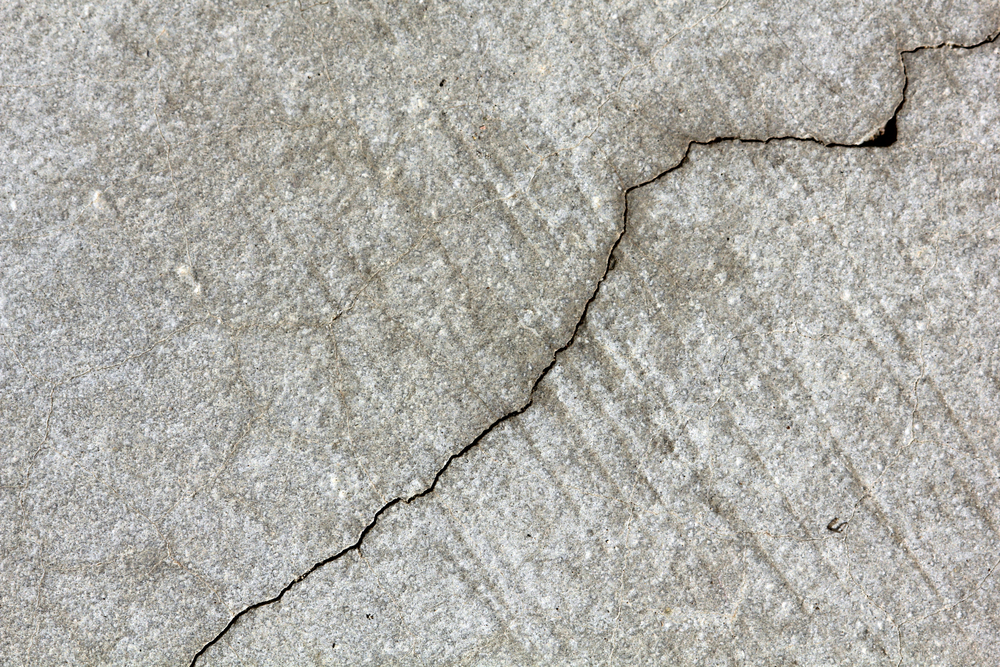 Crack sealants are specific to pavement types. Different types of pavement require different materials, depending upon their construction and use. Notwithstanding the lack of mention in the foregoing sections, crack sealing is used extensively for the maintenance of rigid (concrete) pavements. The following specifications and comments are, therefore, categorized under two sub-headings, flexible (asphalt) and rigid (concrete) pavements.

Now and for the foreseeable future, hot-applied, modified asphalt cement based crack sealants are the most effective and most widely used on flexible pavements. Such materials have to be pre-melted at elevated temperatures, per specifications, prior to application.  The applicable ASTM (American Society for Testing and Materials) Specifications are;

STATE DOT SPECIFICATIONS – Generally modifications of the above specifications.

Other types of materials, such as emulsified asphalt, cut-back asphalt, and chemically cured products will continue to be used where the cost or use is justified.

The materials used for rigid pavements vary more widely than those used for asphalt pavements, depending upon the pavement use. Generally, hot-applied asphalt-based crack sealants are most effective and widely used on rigid pavements. The applicable specifications are listed below;

Resistant to fuel and heat generated by aircraft exhaust.

Crack sealing is a highly cost effective maintenance procedure for both flexible (asphalt cement) or rigid (Portland Cement Concrete) based pavements. Most states in the U.S. use crack sealing and filling as a part of their standard pavement maintenance program. It is imperative that the maintenance personnel understand the difference between crack filling and crack sealing, use the specified product and apply according to detailed product recommendations.

Crack sealants are engineered products, specific to the pavement construction, traffic volume, loads and ambient conditions. Majority of the crack fillers is based on asphalt cement, and modified with polymers or other specially chemicals/ fillers. Some specialty crack sealants are based on silicone or multiple components curing chemicals. The performance requirements are detailed under ASTM, Federal Specification, or state specifications. The DOT’s are an excellent guide to the type of the products that shall be chosen for a specific job within the geographical region, to achieve the optimum performance.