Sealcoating Performance and the Importance of Proper Cure Conditions

The majority of sealcoatings are water-based coatings, either based on refined tar (RTS) or asphalt Emulsion  (AE). Such coatings are safe to handle, store, and provide years of projection to asphalt surfaces, when applied properly and allowed to cure under the right ambient conditions. In this article we will discuss the film formation mechanism and the desired ambient conditions for initial and final cure of sealcoatings.

Water is the major component of sealcoatings, e.g. the sealer supplied as a concentrate contains typically 60% water by volume. After adding 30% water to 100 gallons of the concentrated sealer, the water proportion increases to nearly 70%, by volume. Sealcoatings, like other water-based coatings, cure releasing water to the atmosphere and reach their full strength after the release of all the water. It will be beneficial to understand how the water is released from the sealer film and the influence of the pavement and ambient conditions on the release of water and ultimate cure of the sealcoating films.

Sealcoating professionals are well versed in these details and all make possible efforts to comply, recognizing that deviations may result in poor performance and premature failure.  Even the very best of the coatings if applied and cured improperly is liable to fail.

For the optimum performance, sealcoatings should be;

• Applied at the proper coverage rate, (expressed either in gallons/sq. yard or sq.ft./gallon), on a properly cleaned and repaired surface

• Allowed to cure “thoroughly” or “sufficiently” under a set of pavement and ambient weather conditions that will allow the coating to attain its optimal firmness.  These “ideal” conditions are simply the ambient and pavement conditions that are specified by the manufacturers and accepted by the industry under which the sealcoatings shall be applied and allowed to cure.

Sealcoating, based on either asphalt or refined tar, is stable dispersions of various ingredients in water.  The major ingredients are:

• Binder.  The refined tar (RT-12) or asphalt cement (AC) is called the binder in sealcoatings. As you may know, both asphalt and refined tar are thermoplastic materials, meaning that they soften and melt at higher temperatures (about 100°F to 180°F) and become hard and brittle to cooler temperatures (below 60°).

The binder is the backbone of sealcoatings. It is the ingredient that protects the asphalt pavement. In the wet state (uncured), sealer contains a fine dispersion of binder particles in the range of 2 to 5 microns (human hair is approx. 25 microns or 1 mil), in either spherical or elongated cigar shapes.  Upon full cure the binder forms the continuous film, tightly holding all the fillers and sand/aggregate.

• Clay, fillers and aggregates.  To impart proper toughness to the sealcoating film and counteract the tackiness of the binder at elevated surface temperatures.

• Specialty chemicals.  Such as surfactants and emulsifiers to stabilize the sealcoating systems.

• Water.  As the medium.  In most sealcoatings, water constitutes the major component, more than 60% by volume.

For more in-depth information about asphalt sealcoating, you can check this guide.

Sealcoatings, like all water-based coatings, attain full cure through the loss of all the water from the wet film.  As the water leaves, the volume of the wet film shrinks.  The shrinkage in volume is directly proportional to the amount of water (by volume) in the mix.  For example, if the mix design has 70% water by volume, the wet film will shrink by 70%, or down to the 30% of the original volume.

Related: How to Mix and Transfer Pavement Sealer for Sealcoat Systems

The evaporation of water from the wet film produces a steady turbulence in the film and forces the suspended particles into a closer proximity.  The film becomes progressively denser, thus forcing the binder particles to touch one another and fuse into a continuous film, encapsulating the filler particles in the process.  Simultaneously, the excess binder in the matrix allows the film to effectively bond to the pavement surface.

Descriptions such as the full cure, final set or optimum strength convey the message that sealcoating has reached its full strength and is capable of performing its task, as a protective coating. Properly cured sealcoating forms a continuous film, free of voids or imperfections, which stop water, chemicals, salts, etc. from penetrating and damaging the asphalt pavement underneath.  Understandably, any deficiency in the curing process will not allow the binder to fuse properly and leave voids in the film, thus resulting in inferior performance or failure.

During the curing process, sealcoating films transition through various stages of water evaporation from the applied film.  First it attains initial drying when the film becomes “tack free” to the light touch, then it becomes firmer (about 95% cured) to take light pedestrian traffic, and finally full firmness to withstand light vehicular traffic, when all the water is lost through evaporation.

The wet sealcoating film is not one solid film but a composite of several layers of very thin films (imagine a sheet of plywood). Like most water-based coatings, sealcoating dries, in successive layers, from top to bottom. As each layer dries, it shrinks in volume, becomes tight and relatively impervious to water vapor, therefore, impeding the evaporation of water from the bottom layers.

The first 80% to 85% of the film dries relatively fast, but the release of the last 10% to 15% of water becomes difficult and requires the right set of ambient and pavement conditions. It’s a fact that the release of water from the bottom layers of most water-based coatings becomes progressively difficult as the film cures.  For optimum performance, all water must leave the film: 80% to 90% is not good enough.  The uncured 10% to 15% of the coating will be torn or dislodged if traffic is allowed on it too soon. The percentages are mentioned here only to explain the phenomenon.  They will, of course, vary with material and mix designs, e.g. mix designs with fillers and/or aggregates will dry faster than sealcoatings coatings without them. 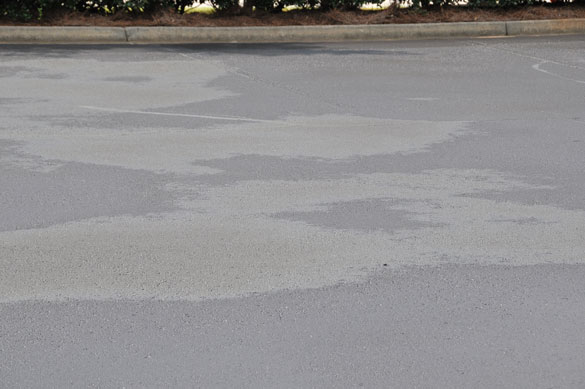 The conditions described below play the decisive role in determining the thoroughness of the overall cure process, therefore, sealcoating performance. These conditions are the recommendations of the industry and its research association, Pavement Coatings Technology Council (PCTC). These factors are important in obtaining the optimum cure of sealcoatings.

1. Temperatures: Both ambient and pavement

Sealer should not be applied unless the pavement temperature is at least 50°F and the air temperature is 50°F and rising.  As described in the foregoing sections, the fusion of the binder particles (in sealcoatings) to form a uniform and continuous film depends on their ability to soften under the ambient and pavement temperatures. The process of fusion is greatly enhanced at higher temperatures; say 75°F to 85°F.  Conversely it is significantly reduced at temperatures below 50°F.  Let us review the extremes; cold and hot temperature applications.

When sealcoating is applied below 50°F, refined tar (or asphalt) particles do not soften and form a continuous film, thus leaving clay and filler particles uncoated. The color of the sealcoating cured under such conditions usually turns out grey and blotchy in appearance and never returns to its characteristic dark slate black appearance even at higher pavement temperatures, at a later date. Simply the temperature of the pavement normally does not reach high enough to re-melt the binder particles and force them to flow and form a continuous film.  Even if the pavement temperatures reached high enough, still it will not be sufficient to re-mobilize the binder particles to flow and envelope the clay and filler particles and form a continuous film. Needless to say sealcoating cured under cold weather conditions lack the integrity and are liable to fail prematurely.

Sealcoating applications under hot temperatures can be equally problematic.  Sealcoatings should not be applied under the summer sun (90°F ambient) without first cooling the surface with a fine mist of water, also called “fogging”.  Water should only dampen the pavement, without leaving puddles.

If applied to a hot pavement without “fogging” it, the sealcoating film almost gets “baked” as soon as it hits the pavement.  The sudden loss of fluidity of the film, due to flashing of  water, immobilizes binder particles and prevents them from fusing and forming a continuous film. Devoid of the proper fusion process, binder particles do not effectively envelop the clay and filler particles in the sealer film.  Additionally, binder particles under such conditions do not reach the hardness imparted by the clay and fillers and continue to stay sticky and soft.  And that could lead to lead to a problem called “tracking”, where the sealer is tracked on the floors or carpets, etc.

Relative Humidity (R.H.) of the atmosphere plays a significant role in the cure mechanism.  It directly influences the rate of water loss from the sealcoating film.

Relative humidity (R.H.) is the ratio of the actual moisture content of the air, at a specified temperature,  to its total capacity.  For example, 50% R.H. means that only half of the air’s total capacity to hold water has been used and it is capable of absorbing another 50% of moisture or vapor from the surroundings.

Conversely, 90% means that the ambient air is loaded with moisture and has very little (10%) capacity left to hold additional water. Sealcoating applied under highly humid conditions will take a long time to cure because there is very little room for the ambient air to absorb the released water from the film. The sealer film will release only the amount of water that can be accommodated by the atmosphere.  The atmosphere and the surrounding environment can be thought of as a sheet of paper towel:  when dry it will soak up the spill but will not mop up if the towel is too wet.

Sealcoatings, understandably, will cure faster at lower humidity than at higher humidity.  Under highly humid conditions, sealcoatings shall be allowed longer drying time before the application of the subsequent coats and finally opening to traffic.

The drying and cure times specifications do not take wind velocity or air movement under  consideration, however, it is a known fact that air movement, especially under highly humid conditions, helps sealer dry faster than without any air movement.  A light breeze assists in the  dissipation of the water and volatiles from the immediate vicinity. Conversely, under low humidity conditions (below 20-25%). the air movement may cause the sealcoat to dry a bit too fast.

Sealcoatings being water based, cure by releasing all the water from their applied films. For their optimum performance, the cure conditions must be right.  The cure of sealcoatings is decisively influenced by ambient and surface temperature, relative humidity and wind velocity.  Sealcoatings cured under improper conditions are liable to have inferior performance characteristics.