How to Stripe Straight and Start / Stop Exactly Where You Want

Here’s what I’d like to do. I’d like to answer both questions simultaneously, because the answers are connected. I can’t separate the two. I’ll be detailed, give illustrations and then give a final recap. I hope it all helps.

Here we go. First, while striping keep your head still. I’ll give an illustration.

I coach baseball. When we coach pitchers we tell them, “don’t move your head”. Here’s the drill. When a right handed pitcher steps back with his left foot, his head remains motionless, directly above his right foot. The same goes for batting. When the pitcher steps back with his left foot, the batter also coils back, BUT, his head never moves either. It is the same with striping, so keep your head still.

Next then, when the pitcher strides forward, so does the batter BUT, only about 6”. Why? Because if he would stride forward 18” his head would drop to a different level, and so would his eyes. You don’t want that. So, keep your head still and take normal strides.

Next, here’s another picture. Runners and Olympic walkers don’t move their heads either. They glide along the same “plane”. Everything from their neck down moves but not their head. There’s no bouncing around, no swaying, no up and down stuff, just glide.

OK? So here’s a recap. “Keep your head still” and “take normal strides”. That way, your eyes can focus.

The next question is “Where do you focus your eyes?”. I have another story. I took a couple of speed reading courses at California State University, Northridge (CSUN). Reading fast doesn’t depend solely upon “peripheral vision”. It depends on the right balance of “hard focusing” and “soft focusing”. Think of it as, also focused on what you see out of the corner of your eye. Keep that in mind. 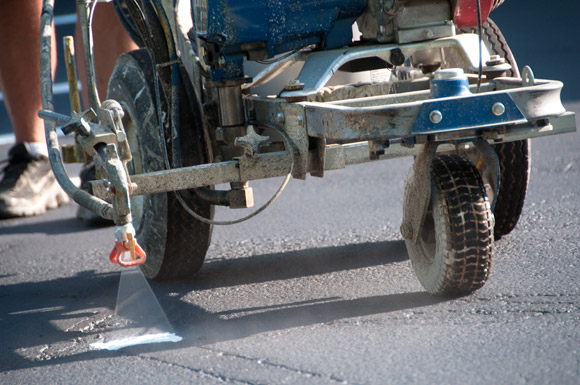 Part 1) Lining Up Your Machine
Getting your machine where you want it involves 2 things:

A) Getting the tip guard, which houses the tip, just to the side of your chalk line.
B) Getting the machine to travel straight.

Part 2) Starting Out
I want you to know 2 things:

1) You don’t need a running start. Don’t think that. If full speed for you is 3 MPH, fine. You could put the gun directly over the starting point and just start walking.
2) Don’t try to drag race up to speed. Just start walking. Think of it as a grocery cart. So what if the customer gets 24 mils of paint during the first 12”? You won’t go broke. You don’t even have to add this into your paint costs! And it looks great and it’ll last. Relax and just start walking. You’ll get up to your speed in probably one stride. All that said, let’s get back on track.

Starting out here’s what I want you to do:

Recap. You don’t have to start the line at full speed. And, it’s not a drag race. Hard focus on the starting point while soft focusing on the tip guard. Your hand will know when to pull the trigger. Hopefully, it’s right above your starting point. 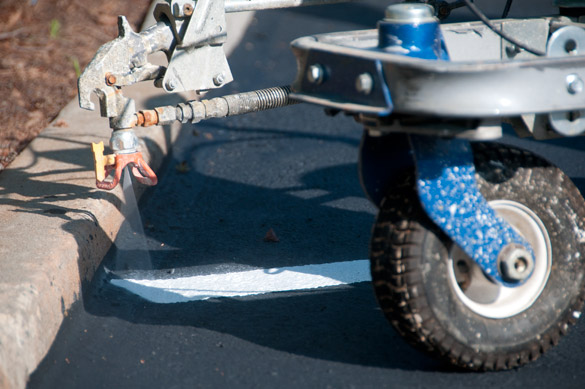 Next, stopping right where you want. Let’s say you’re coming to the end of a 36’ line. Do this; keep a hard focus on the paint hitting the chalk line, then, when the stopping point comes into your peripheral vision, slow down, at least a little, and soft focus on it simultaneously. Now, read that again and picture it.

DON”T hard focus back and forth between the two! That’ll drive you nuts.

Let’s get back on track. When you see the stopping point coming into your peripheral vision, just think “there you are, I see you”. But, stay hard focused on the paint hitting the chalk line and stay soft focused on the stopping point. Your hand will know when to let go of the trigger. AND, this is important, you can slow down. You don’t have to stop the paint flow while traveling at full speed.

All that writing gets this last, little recap.

Again, all that writing gets this tiny little recap. Here’s why. It’s in the details.

Last, there are times, even now after thousands of jobs that I miss. But, it’s always because I’m either hurrying or I glance away at the wrong time, just human error. You’ll have that. But, you’ll also get better. Keep going. Keep in touch.