How to Remove Lines From a Parking Lot

Removing unwanted lines from a parking lot is not easy. In this article – taken from his book – Dan Zurcher of American Striping offers three effective methods for making it easier to remove new and established line paint from pavement. The three methods include: (1) A wire brush for small mistakes, (2) a “scarifier”, (3) and a “shot blaster”.

Everyone carries a wire brush. One of mine looks like an 18” toothbrush. The wires are about 1” long. The other looks like a wood block.

Wires are 1” long and the wood block is 3” x 8”? It’s a scrub brush! I also buy boxes of rags and I generally have one within reach. 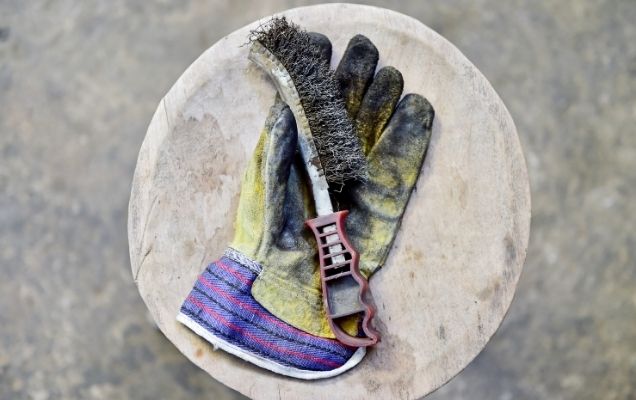 Next, you’ll have the cutting agent for the particular type of paint. So, if my machine does not shut off (notice how it’s the machine’s fault), grab the brush and try to quickly scrub it off. If your rag is closer, wipe it up quickly before it dries. Then, you’ll have less to wire brush off.

And if you can wet the rag with the cutting agent to wipe it off (before it dries), you’ll do well.

It’s not easy. It’s not fun. But, it’s not hard either. This “elbow grease” job only lasts for a minute. And you’re a responsible person. So, forget ego and scrub. Frankly, when I see someone wire brushing, I think to myself…that’s a good striper.

Pronounced “scare” but, think of it as “scar” because that’s what you’re going to do – scar the pavement by scratching it!

You’ve probably seen this, on the street. When I move a traffic lane, I cannot simply “black out” the old line. I need to remove it so you don’t crash. 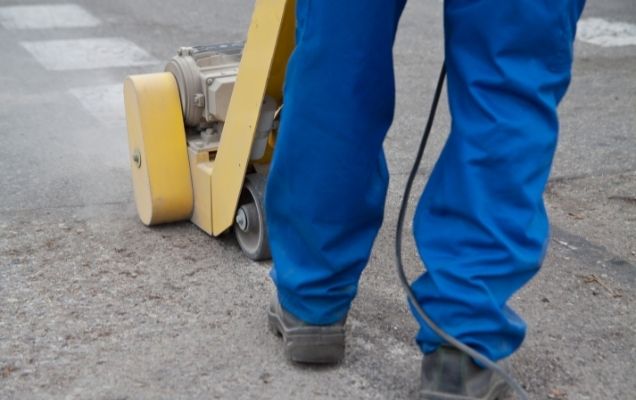 And the end result is this: you’ve seen the “scratches” where the old line was. They’re not too deep. But they are there. This “path” is about 8” wide. (The scars or scratches look like grooves.) I’ve just “scratched” = “scarred” the road.

I’ve removed the old line, taking a little bit of the road too. But, the line is gone! The small hand operated machine that does the work, looks like a hand operated Garden Tiller. It’s called a Scarifier. Rent it.

It costs something like $200.00 per hour hours or $400.00 per day. And, you may have to pay for the blades. They look like the sprockets from a bicycle. Or, “Sub” the job out to someone with a Scarifier to “grind” off the lines.

If they charge $200.00 for removing 30 lines or an abandoned Crosswalk, hire them.  I’d try to be there, to help. Maybe you can help clean up. That’s next.

Picture grinding a parking lot using an 8” grinder, walking slower than normal. Yes, there are debris.

You can blow the debris to a spot and sweep it up… then haul it away. Or you can sweep every line, (the debris doesn’t really fly very far and this saves blowing off the entire lot, unless you bid for that too). 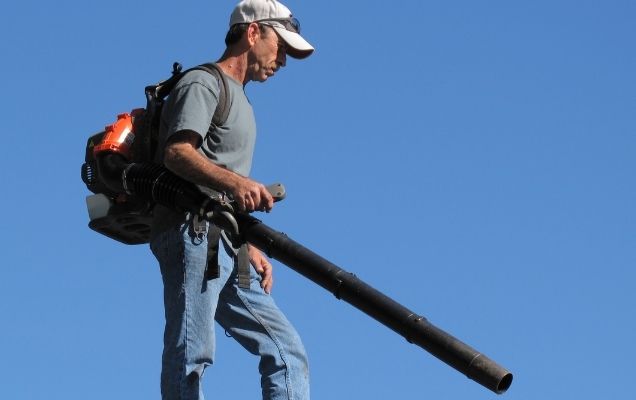 Here’s some good news. I hear the debris is a fantastic base. Or, dump it at a local landfill. Charges may be $35.00. So, call your local landfill and check the price.

So…I’ve done this myself for a Regional Airport. I removed Taxi Lines.

I then reapplied new ones. I’ve also subbed jobs out = I called another Striper to remove 1900’ on a grocery store job. I needed to turn that striping, 90 degrees. So, his crew showed up and they did the work. I helped clean up, they hauled it all away. It took two hours. They left, I striped, and I’m done.

So, if you have a “Scarifier, you may also get jobs from other stripers. Bid fair and help them. Don’t steal their client. You’ll need help on a job one day, too.

5. Use A Shot Blaster

Think of it as a Sand Blaster, but instead of using sand to blast off the line (what a mess that would be!), we use metal “Shot”. Yes, just like the metal BB’s that are inside a Shotgun Shell called Shot.

So, it’s called a Shot Blaster and we are Shot Blasting. 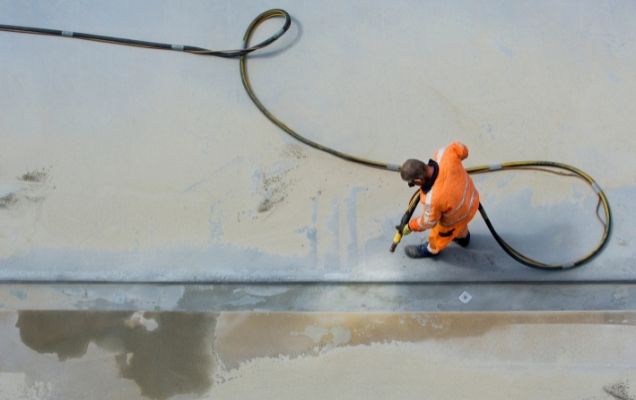 Shot blasting is a bit specialized. It’s used almost exclusively for “roughing up” concrete. That way, the paint will be able to get a better “grip” on it and hopefully last longer. There are three difference scenarios, you can use the Shot Blaster:

And again, you’ll be “roughing up” the smooth, and sometimes, shiny surface of a concrete floor.

Another note: I want you to pretend you’re Shot Blasting an entire floor. If you move methodically and if you move at a consistent speed, you’ll do well. But, if you stop to look at the pretty people, your Shot Blaster won’t and you’ll have an area rougher = “alot prickly”.

So, if it’s filthy, do go a little slower. If’s if not too bad, you can move a little more quickly. But I wouldn’t stop. Don’t just stop.

When to use A Shot Blaster?

So again, the Shot Blaster will “rough up” the surface by blasting it with metal BB’s and also remove the filth and paint that’s there. The new surface will now resemble the “prickly” surface of the outside sidewalk.

Now we can do a couple things. You can paint it because the paint can now “grip” the surface. Or, you can walk away because it’s clean already!

What are the Types and Sizes of Shot Blaster?

Now the machine. There are basically two types – electric or gas engine. There are also three sizes – dinky one, a medium sized one and a big one that you ride!

First. If you rent the dinky one or the medium sized one, you’ll also rent the vacuum system with it. The vacuum system vacuums up the debris you’ll create, including very small chips of concrete. It also collects most of the BB’s – a few will fly all over the place. So, you must wear eye protection and ear plugs. Then, walk around with a “magnet broom” to pick up remnant BB’s. The vacuum gets most.

I like the “Big Boy”. It vacuums itself. The rent does not include the trailer. If you have a trailer, cool. If not, rent the trailer with it. How many BB’s should you get? Ask the Equipment Rental Company how many bags of BB’s you’ll need, and buy more than that.

You can always return them and get your money back. Besides, you’re bringing the machine back anyhow.

OK? Three machines, and two types = Dinky, medium and big; electric and gas.
Dinky and medium need a vacuum. “Big Boy” has his own and you can ride him = fun, but, you’ll also need a trailer to tote him around.

There are types of jobs; Shot Blasting, “Track Blasting” and “Just Clean The Concrete”.

Do You Need to Apply Paint After Shot Blasing?

Whenever I’ve Shot Blasted, I’ve always used a Part Paint. (I wrote about this in my book.) You’ll mix Part A with Part B. These Part Paints are sticky and dry incredibly hard.

When you consider tight turning traffic, on concrete a Part Paint is a must. (Don’t forget the cutting agent.)

AND, when you start spraying, don’t stop. A Part Epoxy is different than a Part Tile Clad. They dry differently. So, don’t let your striper just set idle while you take a lunch. That said, clean it out well and right when you’re done.

I’ve had no luck bidding the following…

But, I have had good luck bidding the following…

I used a Grey (2) Part to cover an area of a garage floor. I applied it with a roller on an 8’ pole. I was going to change the existing standard layout to a H/C layout. (The area had been “blacked out”, “re-striped”, too many times.)

The customer wanted to try “just paint the floor”. The (2) Part “ate” the old stripes…but…only in some places. It blistered. So, I scraped the small areas here and there, and reapplied the (2) Part by hand. All was well.

BUT, here’s the lesson; IF you’re going over old lines or paint, do a test area. Do it. That saidyou may still have some trouble spots. Just let your client know. Why? They’ll appreciate honesty. Two years later, we Shot Blasted that area…and…?…the other floors too.

On Line Removal…  (This is my recap = recapitulate.)

I hope this primer helped. Find your niche. Work hard. At least you know basics.

Dan Zurcher
How I Stripe a Parking Lot, (16) Years, By Myself, Third Edition. http://www.AmericanStriping.com